I’ve been working with multisite over the past few weeks testing how it works. I’m now creating a brand new instance that I will push to my Kinsta account, but as I’m setting up the subdomain the site is running very slow. No content, no images and everything is correct in the hosts file, it is just super slow. Have there been any reports of this in the latest update?

Hi @Eileen. I’m very sorry for the trouble there. I’ve merged your topic with a reported bug here that others are experiencing. We’re still looking into this.

A post was split to a new topic: Slow/Performance Issues with DevKinsta

Hi @michael, is there any update on this? As others have mentioned, it has been a long time since this performance issue was raised. On my end, I’m hardly seeing improvement (if any at all) in page load times on the local environment, also not after updating DevKinsta to the latest version.

Hi @GoldyOnline! We don’t have any update at this time, though I’ll certainly let the dev team know this is still an ongoing matter. Is it possible to receive the details from your install as outlined by Michael in the previous post? I’m not sure if it may have been shared yet outside of the community forum or privately via DM to Michael directly so apologies if that has already been done.

Sorry for the slow reply but I wanted to find some time to properly site down and collect the data, however, when I did yesterday I ended up spending the time on trying to figure out a solution instead. And I actually did find an alternative solution that resolves the issue completely for my system:
I upgraded my Windows 10 Home to Windows 10 Pro, and then switched to using Hyper-V instead of WSL 2, as also suggested by others earlier in this topic, this completely resolved the issue for me, the local environment is lightning fast now!
This might not be a solution for everyone but I’ll share what I did below, perhaps it will help at least some people with similar issues.

What I did is:

First I tried to resolve the issue in the existing Windows 10 Home + WSL 2 environment.

Working in the Wordpress backend was equally slow, dramatic one should say better. Also, CPU usage and Power usage (checked in Task Manager) were very high while loading pages or working in the WP backend. A process called “COM Surrogate” usually would shoot up dramatically in CPU and Power usage and my laptop would get super hot and the fan was blowing like there is no tomorrow. I have no clue why as I was doing almost nothing in the test environment other than opening a few pages. I guess it’s somehow related to the combination of Windows 10 Home, Docker and WSL 2 and perhaps the way the files are shared between Windows and Docker in the DevKinsta setup as per the warning “Docker Desktop has detected that you shared a Windows file into a WSL 2 container, which may perform poorly.” that was mentioned previously in this topic already.

Then I switched to Hyper-V and it makes all the difference! The steps for that were/are:

After this my local environment is working very fast and is now a proper environment for development. The funny thing is that in Docker settings it says “WSL 2 provides better performance than the legacy Hyper-V backend.”, which I suppose is normally true but not in this case that is for sure!

All of the above is of course a workaround, it doesn’t solve the issue with WSL 2, but simply avoiding using it at all is good enough for me.

I just tried this solution and now instead of waiting a minute or more for a page to load, I’m getting almost normal loading times.

Thank you for sharing your info!

I tried another approach, i managed to enable Hypver-V for windows home following this: https://www.itechtics.com/enable-hyper-v-windows-10-home/ 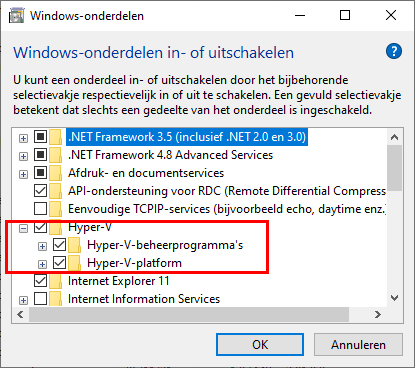 But the problem is Docker still knows i am on windows home, so the option “Use the WSL 2 based engine” in step 5 is not possible for me. 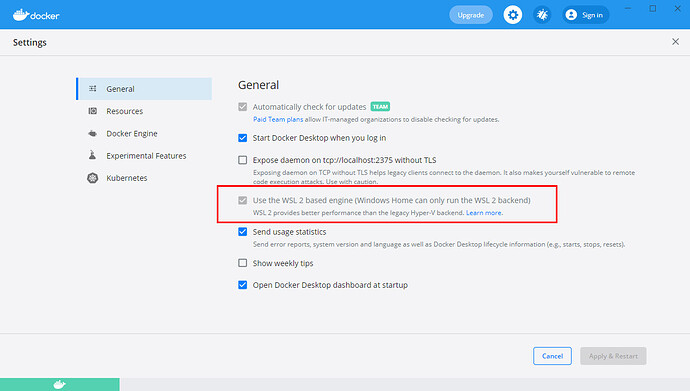 Anybody has a solution for this?

I believe that apart from “Hyper-V”, Docker als requires the “Containers” option enabled in “Turn Windows features on or off”. Maybe that is the issue?

@GoldyOnline Wow! Thanks so much for digging into this! I’ve sent this over to the devs to review:pray:

Thanks for the details, and note on backing up your databases before switching @GoldyOnline

This works for me too. Finally normal loading times

Thanks for sharing this!

Amazing! Thank you so much! Speed went up 10-fold!

. I have multiple dev sites that thankfully do not rely on the database content. But after an update to WSL2 the databases were lost, and performance dropped significantly. I’ve been trying to remedy since and was afraid to turn of WSL2 base engine. But that did the trick for me, everything else was already as you described.
Load times are about 10 times faster. Now of to rebuild my workspaces…

@ GoldyOnline Upgrading to Windows 10 Pro indeed fixed the problem, thank you for figuring this out.

Not yet I’m afraid, though upgrading to Windows Pro is not necessary in all cases. We do have several users that have Windows Home that are not experiencing this issue which adds to the confusion for us. It appears an issue with Docker and Windows but we’re working on possible solutions and writing an official guide for users experiencing this issue.

Here’s what I observe:

Here are some numbers (I tested each case 5-8 times, here is the mean value):

When is this going to get fixed? I just spent ages getting this set up and now I find it’s so slow it’s useless. Then I see that ppl have been complaining since January about it. what’s the delay?

Welcome to DevKinsta @sparkzilla ! Unfortunately, it’s a bit more complex than what it appears on here. While we’ve made some improvements with version 2.2.0, many of the issues being faced here are specific to Docker, the operating system, and the operating system configuration. It’s often not directly related to DevKinsta. If you’re on Windows 10, I recommend following this guide here. I understand this is still not ideal. We’re working to resolving these issues in as many scenarios as possible. I’m really sorry for the trouble here!