Hi.
I understand it’s not you - it’s Docker.
But.
Just in case - support for Apple Silicon would be awesome.

As a workaround until Docker releases official support, Docker Beta/Preview is available and will work with DevKinsta. It can be downloaded here

Hello @michael is there an M1 native build available for Mac computers with Apple Silicon? When I download a build from the DevKinsta website, I don’t see an option for Apple Silicon and when opening the Mac binary I get a prompt to install Rosetta: 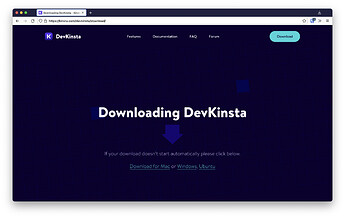 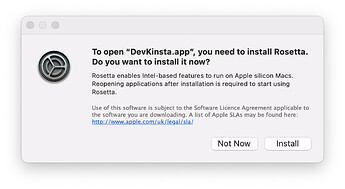 I’ve seen elsewhere that DevKinsta does have a native/optimised version so wondering how to obtain it? Id rather not install Rosetta unless I have to!

While we don’t offer a native build for Apple Silicon, it shouldn’t have any issues running with the current build available. Rosetta would need to be installed. If you do run into any issues however, please do let us know so we can investigate further.

Thanks for confirming. Are there any plans to make a native build for Apple Silicon on the horizon?

We haven’t announced a native build at this time and don’t current have a public roadmap but seeing increased interest here for native build helps the team here know folks are interested in this. Thanks so much for contributing here and sharing your feedback!

Ok, thanks for the update – will install under Rosetta for now.

It looks like the images need to be updated as well as the app: "Image may have poor performance, or fail, if run via emulation" 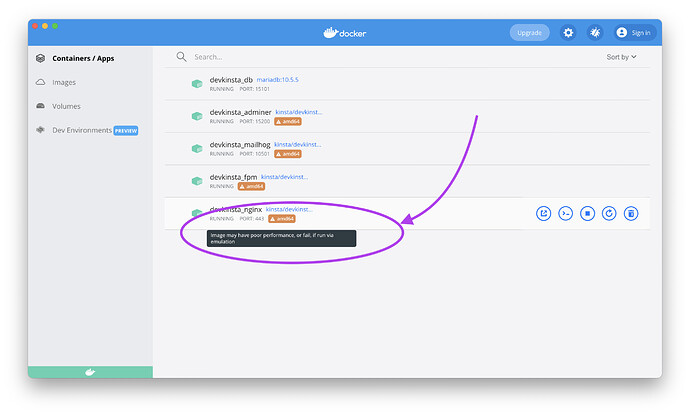 Also, the just released version of Docker Desktop (4.3.0) on Apple silicon no longer requires Rosetta 2 – DevKinsta will be the last piece of software that I need Rosetta for so would be good to get this bumped up the roadmap if at all possible. 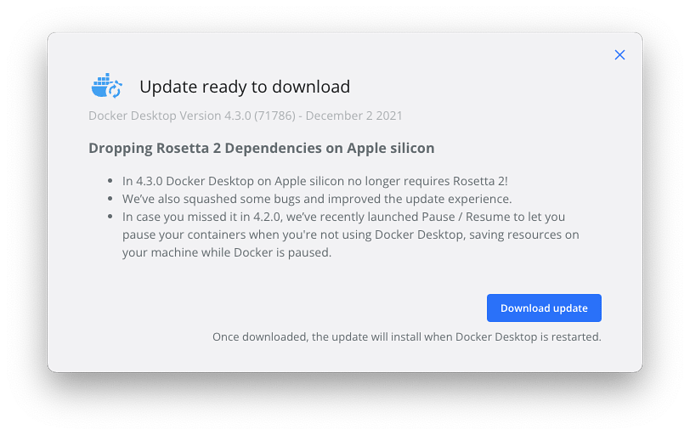 Thanks @jamesgreenblue, I’ve bumped our devs with this request as well. Thanks for pointing that out about Docker 4.3.0!

@Kevin What is the latest news on M1 Native non-rosetta version of Devkinsta?

Hi @kadso, thanks for reaching out.
I believe this was resolved with the 2.5.0 update: DevKinsta Releases (Minor) - #10 by David_Greene

At least it looks like the Devs built ARM64 docker images for M1s. Does that meet your expectations oris there more we need to do on our end?

Is there any plans to modernize DevKinsta to run native and not require Rosetta?

Thanks for the clarification @kadso. I’m passing this along to our Devs and will get back to you with their answer/plan.

Thanks @Kevin. I appreciate any insight you can provide. I’d like to be able to use the Kinsta experience to its fullest. Some times, its the seemingly smallest things that block ones growth…

Hi @kadso, last I heard from our Devs they were still researching this. I’ll bump our internal thread with them for you, though. And just to be candid: if it ends up requiring them to basically code a 4th version of DevKinsta, it won’t be a quick release since they have the roadmap for major features cemented for 2022. New features/major updates are based on demand so they will also need to look at how many M1 DK users would benefit from this before setting aside the development time.

I’ll let you know what they’ve decided, though.

@Kevin Got it. Thanks for the candid update. I’ll keep an eye on DevKinsta’s development.

@Kevin Is this now available? DevKinsta Releases (Minor) - #13 by Kevin

Thanks for checking so soon! Let me ask our Devs to be sure!

Waiting on a website update @brianleejackson, but will let you know once that’s Live!